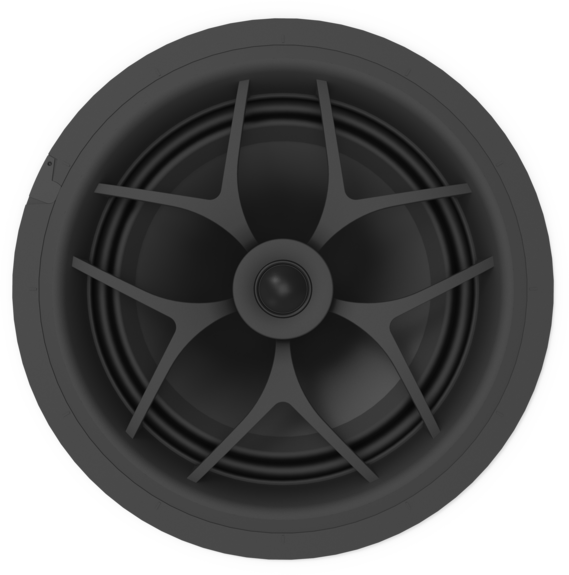 Our all-new D101 ceiling loudspeakers will leave your clients awestruck. A great choice for home theater surrounds, they are also designed as the ultimate distributed audio speaker. Retrofit existing competitive eight-inch models or brackets.
Call for Best Price
$99,999.00Save $NaN

Choosing the right drivers is part of the blend of art and technology that creates Origin Acoustics‘ signature sound. The woofer cone in the D61 is made of Poly Rubber which offers low mass and durability. The silk dome tweeter pivots allowing the installer to direct the critical high frequencies toward the listening area.

While in motion, frequencies between 700-1,400 Hz typically run up the cone of a woofer and are reflected back and forth from the center of the driver. This creates unwanted harmonic distortion. The X-Wave surround found in Origin woofers absorbs these frequencies reducing distortion and maintaining driver stability. This design also maximizes cone area by reducing the width of the surround.

As the driver travels to the limits of its excursion, the suspension, made up of the spider and the surround, becomes more rigid, exerting more control on the movement of the cone. The result is increased, clean power output throughout the driver‘s frequency range.

Utilizing the latest techniques and materials in plastic fabrication, Origin is able to create basket designs with superior stability and acoustic neutrality. These baskets combine with the driver suspension to increase linearity and improve overall performance.

It is important when installing a loudspeaker in the ceiling that it be stable and secure, restricting the vibration of the assembly and limiting transfer of energy into the wall. The revolutionary Tool-Less Installation (Patent #9591390) spreads the weight of the speaker over a larger area than typical mounting systems accomplishing this result with minimal effort. Spring-loaded clips also create more uniform pressure against the drywall eliminating any warping or distortion of the speaker baffle.

A paintable, perforated grille with a micro bezel covers the entire speaker assembly and leaves a discreet finished appearance. Its magnetic attachment makes removing or replacing the grille fast and easy.