Provides a cost-effective multimedia presentation solution for classrooms and meeting spaces. Consists of a black 2-gang wall plate transmitter (HD-TX-201-C-2G-E Series) and a surface-mountable receiver (HD-RX-4K-210-C-E) that enable AV switching, scaling, and signal extension over a single CATx cable for up to 230 ft (70 m). 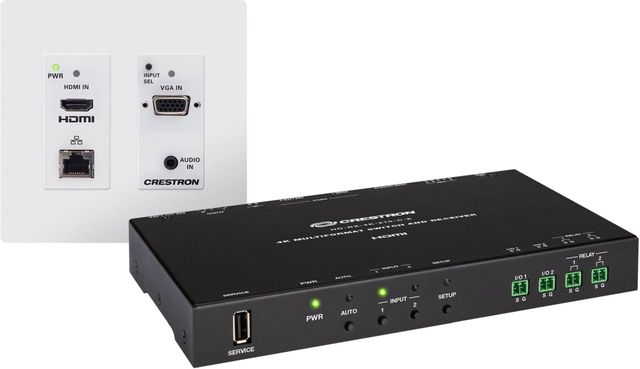 Provides a cost-effective multimedia presentation solution for classrooms and meeting spaces. Consists of a black 2-gang wall plate transmitter (HD-TX-201-C-2G-E Series) and a surface-mountable receiver (HD-RX-4K-210-C-E) that enable AV switching, scaling, and signal extension over a single CATx cable for up to 230 ft (70 m).
$2,650.00Save
$2,650.00

The transmitter provides one HDMI input and one VGA input with a complementary stereo analog audio input. The receiver provides an additional HDMI input that can be connected to a local AV source or to an optional Crestron media presentation wall plate (MP-WP152 Series, sold separately).

Automatic switching among the HDMI and VGA inputs on the transmitter and the HDMI input on the receiver can occur based on the last connected input or on the routing priority assigned to each input. Switching behavior is configurable using the web interface or programmable using a Crestron control system. In addition to automatic switching, input selection push buttons on the transmitter and receiver enable the desired input to be selected manually.

A single HDMI output with a built-in scaler connects the receiver to a display or other device with an HDMI input. Input resolutions are automatically scaled to match the native resolution of the display device, resulting in optimal image quality. For applications requiring comprehensive EDID management, the web interface can be used to ensure that every input is displayed at its optimal resolution and format. Input resolutions up to 4K60 4:2:0 are supported.

Equipped with onboard control ports, the receiver can control various devices in a room. The COM (RS-232) port and CEC over the HDMI output can enable the display device to be turned on or off automatically without the use of a control system. With the use of a control system, the IR port can also control the display device. Two relay ports are provided for controlling a projection screen and other low-voltage contact closure activated equipment. Two Versiport I/O ports enable the integration of devices such as power sensors and motion detectors. An Ethernet port connection to a LAN also provides control by enabling use of the built-in web interface as well as connection to a control system.

In addition to a built-in web interface and control system programming, the built-in .AV Framework technology of the MPC3-201 and MPC3-302 control systems can be used to control the HD-RX-4K-210-C-E as a switcher.

The HD-MD-4K-300-2G is compatible with the Crestron XiO Cloud service, which is a platform for remotely provisioning, monitoring, and managing Crestron devices across an enterprise or an entire client base. The service enables installers and IT managers to deploy and manage thousands of devices in the amount of time it previously took to manage a single device.